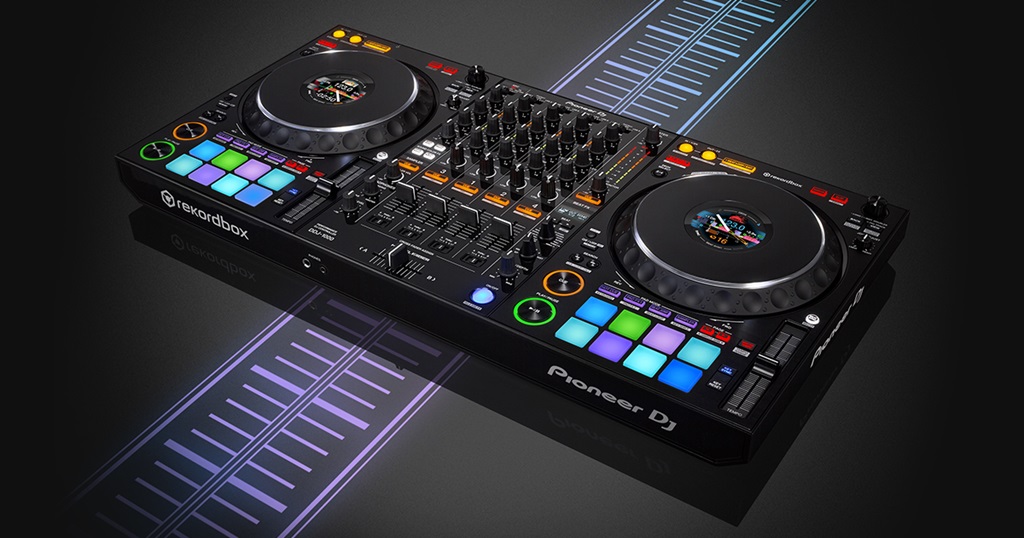 Evolving from the DDJ-RZ series which it’s most comparable to, the 1000 features a four-channel mixer and two media players into a portable package designed for use outside of clubs. It’s made to get the most out of the new version of Pioneer’s rekordbox dj performance software, which features an expanded Related Tracks sorting system, improved audio analysis and an Automix function.

It has a few unique features that probably hint at the development of other Pioneer products, perhaps CDJ’s with performance pads, you can watch the video above if you want to see Pioneer DJ’s full overview of the unit. Here’s our low down on it’s various sections.

Full sized CDJ2000NSX2 jog wheels with platter weight adjustment is a very nice touch to have on a controller, making it completely club grade, although the little display inside seems a bit busy. These show a lot of information, including a waveform, cue and loop points, and BPM. You can apparently customize the information shown. It retains all the information including the phrase meter. The decision to have dual browse knobs seals the deal in the foray of making controllers as robust as their standalone counter parts.

With the new Key Shift feature automatically change the key of your next track to match the master deck and shift keys up or down to mix any combination of tracks in perfect harmony.

Inheriting all the vital effects and the NSX2 series layout, Pioneer have thrown in 4 new beat FX.

The Dual USB  was first introduced on the DDJ-SZ. and it’s great to see the DDJ-1000 coming back with this. Every channel on this new controller is switchable between USB A, USB B, and Line/Phono.