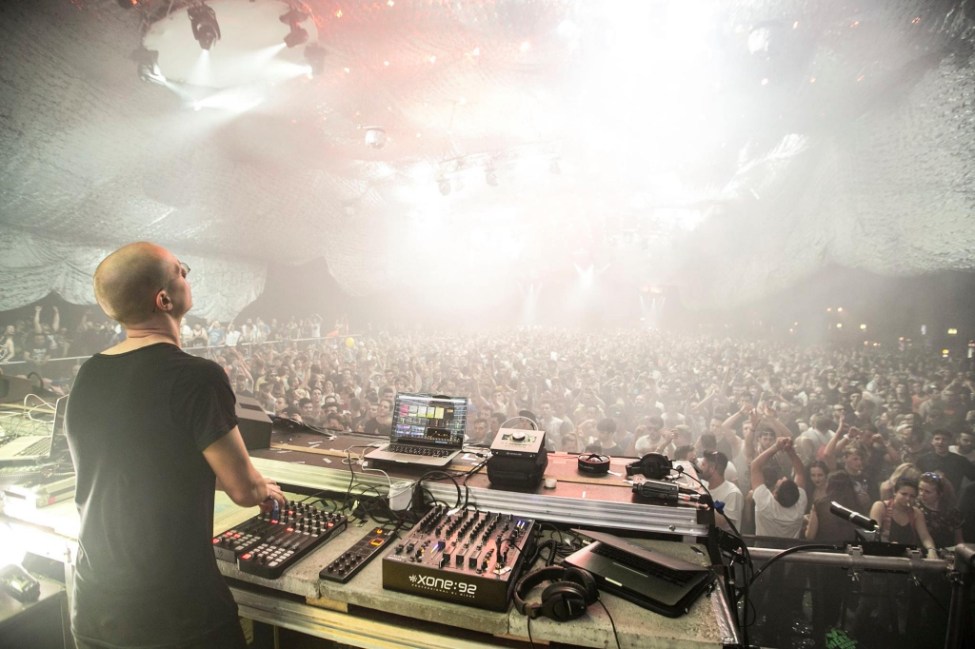 In the twenty minutes I spoke to Lorenz Brunner, I was swept away into his charismatic and cerebral approach to making music. Yet so soft spoken and de void of any ego commonly found in globe trotting colleagues. He answered my first question with almost a ten minute long monologue that was full of rich insight. It’s this kind of insight that has driven his organic and emotionally complex music to the ears of the biggest labels and tastemakers.

Growing up in a Bavarian forest without so many people around, just like his music, so minimalistic with each sound given ample room to play and a role, Employing silence and barring any complex arrangements, yet with an emotion so strong. Here’s a transcription of the conversation I had with him before his gig in Bangalore.

Hi Lorenz, this is probably the question you get asked the most, how did you move from an entire hardware based setup to inside the box, what was your entire process, learning curve, epiphanies you had through this process ?

So, at the beginning of 2006 where I decided to also try and start to produce music and not only collect and dig for music. I got a copy of Cubase copy off a friend, and a MIDI keyboard, but I had no idea about the software, I didn’t even know where to get a kick drum from, I recorded stuff from a microphone and made a kick drum, it didn’t even sound good (laughing). I had a friend at that time, who knew a lot about analog gear and owned a lot of it. He’s more of a very experimental guy who doesn’t care much about making music, it’s more about tinkering with them, soldering, circuit bending and stuff like this. He’s also into speech computers and I was like talking to him a lot at this time, because I know he has knowledge about the technique and I want to learn how to make a track, and it was a good combination. I would go to his house almost every weekend and use his synthesizers, like his Access Virus A, B, C, lots of Jomox, Waldorf and Nord stuff. At first I had no clue what any of it was, but he taught me the basic techniques and usage of these machines, like oscillators, filters, envelopes etc. At this time I also started to buy some of this gear, this time was a huge learning time, I tried to finish tracks, but it was nothing I felt I could use. However I learnt these techniques and I learnt my way to make these tracks that I wanted to make, but as I learnt more along the way,

I realized that for me it’s not so important to know where these sounds come from, what’s important for me is the outcome. Its about being able to create an atmosphere or mood in my music with whatever instruments I’m using.

With hardware, I was suffering from stuff like MIDI problems, loose cables, latency, problems with the sync, recording issues and not being able to change something in the arrangement view after recording it (laughs) , although of course today there are digital interfaced analog synths.

Evidently you wanted to get along with your music and ideas and not be bound by these interruptions..

So at the beginning when I already learnt to use these synths, these problems started to become a hinderance for my creative process, I had to even get a huge table, a big room, arranging my studio, getting a MIDI solutions splitting box, and investing a lot of money you know in my gear (laughs), and I was not even making any money at that time, I just worked half time and wanted to have a lot of time for making music.

So I started to work more and more on the software as it was more practical to work without any hinderances, so I can have all the time to focus on my music, and a workflow without interruption, so I could focus 100% on my mind and cerebral inspiration, but this is very subjective.

Everyone wants to work in a different way for some people they need to have those interruptions or need to work on hardware to be inspired, but for me I need to zone out, I need to forget time, I need to have almost like a meditative state of mind to be able to be creative, you know ? I can’t have it like, you know.. for example,At some point I remember,  I bought this Elektron machine, you know wait.. what was it called, the machinedrum! But it was difficult for me, I thought okay I can now use this and work on a track now, but starting to dive into all those menus, and I’m reading the manuals, I haven’t been able to finish the track (laughs).

What was the most important part for you about making the music ?

I’m not saying this can’t be fun, I’m just saying this is my character, I’m a bit of pragmatic person, when I look at something, I ask what do I want to do with it ? Do I want to make music with this, or just collect them or mess around like my friend does, who now by the way has even built his own synthesizers, but this for me is impossible! I saw his room at some point, and it looked like a fabric with cables, soldering, circuit boards and all these things around. I admire him for his knowledge and is using it for such different kind of stuff, he was never interested in making music, but I learnt a lot from him.

I realized that I started to get interested in music mainly because of the cerebral part as I think music is for the mind.

I slowly by surely then sampled a lot of stuff, I sold my drum machines, synths and started to only use Ableton built in plugins, and those plugins are so amazing, the EQ Eight for example, when you put it on, there is absolutely no color or character, and it does not add anything to the sound, and when you don’t treat it right, it doesn’t sound good, but when you want to cut a sharp frequency at 58Hz, you can do it, I mean there are obviously more EQ’s that can make it more precise, but I don’t need it. For example I know for this kick drum I need to erase 60Hz, I make the Q right and set the gain and boom! I also like the Operator, a lot, for the sound it has, the potential it has, and also the basic effects in Ableton like the Reverb is very good, you can use it in a strong, passive or active way. I understood I could do all this in Ableton in a very intuitive way.

Another important part of my inspiration came from touring, you know every week I had to take 3 to 4 planes and I wanted to bring my setup with me, I didn’t want to stop working on my track when I had a good idea at home, and wanted to keep working on it when I was traveling, for example after having a great show and I had some inspiration that I wanted to put down, so I then totally was convinced that hardware, it isn’t really of me, as much as I appreciate their contribution in general, that is just my individual approach. So that is the story of why I started to use software only.

Tell us a few of your favorite plugins in Ableton or outside of it.

I just upgraded to Ableton Live 10, I’m not 100% convinced yet and I’m having some issues with painting the envelopes in arrangement view as it’s more connected to the grids, it’s not as smooth as it was before. Also when you want to make a few tracks and mark and copy them, or erase them, it doesn’t connect them. So you know this is again buggy for me (laughs) so I use just Ableton Live 9 still.

End of the day it’s all about the sounds and your ears, not even so much about what you use, I talk to so many producers who make super hot stuff using a super old version of Fruity Loops.

So I suppose, being efficient with you process is very important for you..

For me it’s not just the cause of efficiently when it comes to making music, more for the cause of being able to express a certain emotion without any interruptions, because this is giving me the most amount of joy, because when I end up making a track with an atmosphere that I can most relate to, so this is the main reason why I choose this strategy, not for the cause of being efficient. If I needed to use the hardware to reach this place I want to, then I would use it. Technical aspects as like tools you know, like in construction for example, there are people who are into sophisticated tools, and then there are people who use their hands and simple tools. Either way, there is no guarantee that you will get good tracks or good sound whether you use hardware or software.

You know Sven Weisemann, he used to released a lot on Mojuba label, it’s a very inde sort of label that still puts out great music, I was like always a big fan of his sound, you know like the typical example of analog sound and when I met him at a festival and he says “I do all this on fruity loops” (laughs loudly) and I my mind was blown, it was crazy!

Obsess on the atmosphere that is most precious to you, the mood you want to set, that’s I think the most important part and it can go in all kinds of directions, it can be melodic hip hop, minimal, techno, psy-trance whatever, in the end it’s what makes other people enjoy your music if you enjoy it yourself.

A big thank you to the team at Crossover for making this happen.