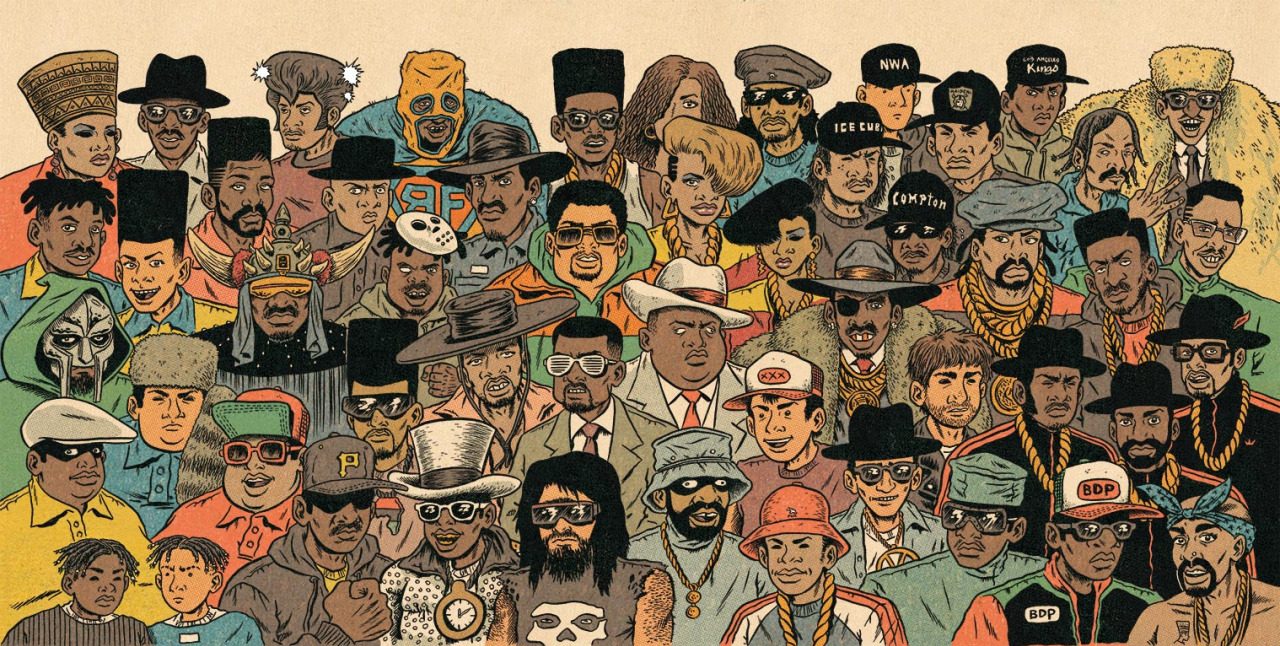 Hip-Hop also called Rap Music, is a music genre formed in the 1970s in the Bronx of New York City, particularly among African-American, Caribbean and Latino youth that consists of stylized rhythmic music with influences ranging from R&B, funk, soul and jazz that accompanies rapping a rhythmic and rhyming speech.

Hip-Hop is more than just music, it’s a rich and vibrant culture characterized by five distinct elements, MCing turntablism, B-boying, graffiti, and knowledge which has evolved over time making it a genre that’s here to stay and it has definitely made a huge impact in the music industry.

This article serves as a recommendation for all those who want a quick overview of some of the best Hip Hop albums you ought to know.

Kurtis Walker AKA Kurtis Blow, an American rapper, singer, songwriter, record/film producer, b-boy, DJ, public speaker, and minister. He was one of the first successful rappers to get signed to a major record label, Mercury Records.

“The Breaks”, a single from his 1980 self-titled debut album, which was often sampled later in numerous hip-hop records, mainly for its introduction made by Blow’s acapella and the drum break, is the first certified gold record rap song for Hip Hop and sold over a half of million copies and released 15 albums throughout his career.

He performed as an actor and in music coordination in diverse feature films including Leon Kennedy’s ”Knights of the City” and the hip hop film ”Krush Groove”. He was host and co-producer for ”Das Leben Amerikanischer Gangs” (1995), an international film production focusing on the West Coast gang scene. Kurtis was recently a producer for the popular Netflix show “The Get Down”

It Takes a Nation of Millions to Hold Us Back charted for 47 weeks on the US Billboard top 200 peaking at number 42, and was certified  1989. The album received widespread acclaim from critics, who praised its production techniques and the socially and politically charged lyrics of lead MC Chuck D.

It Takes a Nation of Millions to Hold Us Back has been regarded by music writers and publications as one of the greatest and most influential albums of all time and was the runaway choice as the best album of 1988. In 2000, it was voted number 92  in the All-time top 1000 albums, and in 2003, it was ranked number 48 on Rolling Stone’s magazine’s list of The 500 greatest albums of all time making it the highest-ranking of all the hip hop albums on the list.

Ice Cube, primary songwriter and rapper for the West Coast group NWA parted ways and headed to New York, to work with Public Enemy’s production team he had already gained notoriety and acclaim for his outspoken, politically-charged lyrics.

Linking up with Sir Jinx, Dr. Dre’s cousin, Cube made use of pre-written notebooks of songs meant for N.W.A.After relocating to New York, they worked on the songs, which included “Once Upon a Time in the Projects” and “Gangsta’s Fairytale”, among others.

Under fire from his former group with the song “100 Miles and Runnin'”, from the EP of the same name, he also recorded the song Jackin for Beats, using beats allegedly planned for use on the next N.W.An album. Amerikkka’s Most Wanted it is considered to be one of the genre’s defining albums with a brilliant collection of tracks that established the rapper as a solo force to be reckoned with.

The Chronic is the debut studio album by American producer and rapper Dr. Dre It was released on December 15, 1992, by his own record label Death Row Records. It was Dr. Dre’s first solo album after he had departed from hip hop group N.W.A and its label Ruthless Records over a financial dispute.

The Chronic peaked at number three on the Billboard 200 and has been certified triple platinum with sales of 3 million copies in the United States, which led to Dr. Dre becoming one of the top ten best-selling American performing artists of 1993. It spent eight months on the Billboard Top 10. The album’s three singles became top ten Billboard singles. “Nuthin’ but a “G” Thang” peaked at number two on the Billboard Top 100 and at number one on both the Hot Rap Singles and Hot RnB charts and has been widely regarded as one of the most important and influential albums of the 1990s and regarded by many fans and peers to be one of the most well-produced hip hop albums of all time. The Chronic was ranked at 138 on Rolling Stone’s 500 greatest albums of all time In 2020.

Ready to Die is the debut studio album by American rapper and lyrical genius known for his storytelling through music, Christopher George Latore Wallace AKA The Notorious B.I.G.This concept album released on September 13, 1994, by the legendary Bad Boy and Arista Records. The partly autobiographical album tells the story of the rapper’s experiences as a young criminal and was the only studio album released during his lifetime, as he was sadly murdered sixteen days before the release of his second album Life After Death in 1997. The album features production by the founder of Bad Boy Records, Sean Puffy Combs, Easy Mo Bee, and  DJ Premier among other superstars.

Ready to Die peaked at number 15 on the Billboard 200 and three singles from the album, Big Poppa, Juicy, and One More Chance, and also featured a  promotional track Warning.

Juicy, the lead single, Peaking at number 27 the lead single Juicy hit the Billboard Top 100 and number 14 on Hot R&B/Hip-Hop Singles and tracks and reached number 3 on the Hot Rap Singles. Big Poppa was a hit on multiple charts, peaking at number six on the Billboard Hot 100 and was also nominated for a Grammy Award for Best Rap Solo Performance at the 1996 Grammy awards.

The Infamous is the second studio album released on April 25, 1995, on Loud Records. by the American duo Mobb Deep.

Albert “Prodigy” Johnson’s ability to depict true to life tales about the dangers of street life complimented with Kejuan “Havoc” Muchita’s dark and gritty production, This 16 track masterpiece of an album instantly became a benchmark in an era that many considered to be the golden age of Hip-Hop. The album features appearances by Nas, Raekwon, Ghostface Killah, and  Q-Tip the founder of A Tribe Called Quest, who also contributed to its production and mixing.

Dr. Octagonecologyst is the debut solo studio album by American rapper and member of the Ultramagnetic MC’s crew Kool Keith, who released the album on the 7th of May 1996 under the moniker Dr.Octagon on Bulk Recordings in the United States and Mo Wax in the United Kingdom. In 1997 The album was later reissued on vinyl with a different track listing by DreamWorks Records under the title Dr. Octagonecologyst. The album was produced by Dan “The Automator” Nakamura and featured the work by the master of turntables DJ Qbert.

Although the album did not sell enough copies to reach the hit the mainstream charts, it did receive positive reviews and recognition. Dr. Octagonecologyst has since been ranked as one of the best hip hop albums of the 1990s and its an album totally worth checking out for its startling originality.

The Fugees was an American Hip-Hop trio that rose to fame in the mid-1990s. The members of the group were Pras Michel, Wyclef Jean, and Lauryn Hill.

The Score arrived in 1996 and was an instant hit. The album topped charts across the globe and was certified multi-platinum around Europe and in the U.S. Featuring the chart-topping single “Killing Me Softly” and a top 40 cover ofBob Marley’s “No Woman No Cry,”  The Score was certified six times platinum in sales by the Recording Industry Association of America (RIAA). The album ranked number 469 on Rolling Stone’s magazine’s list of the 500 Greatest Albums of All Time and won the Grammy Award for Best Rap Album at the 39th Annual Grammy Awards.

Following the success of The Score, the Fugees took a break, to pursue their solo journeys. Wyclef released his first solo album, The Carnival Featuring the Refugee Allstars, while Pras Michel joined Mya and O’l Dirty Bastard for the hit single “Ghetto Superstar. Lauryn leased her chart-topping gem of an album, The Miseducation of Lauryn Hil in 1998 which went on to outsell The Score and bag five Grammy Awards in 1999.

Doc’s da Name 2000 is the fourth album by American rapper Reginald “Reggie” Noble, better known by his stage name Redman, is a rapper, DJ, record producer, and actor who rose to fame in the early 1990s. The album was released on Def Jam Recordings on December 8, 1998. It was a top seller and It peaked at number 11 on the U.S Billboard 200. It’s Redman’s most commercially successful album and his first to be certified platinum only two months after being released. The album went straight to number one on the US Top R&B/Hip-Hop Albums, becoming his third number one on the charts.

Do you have any albums to recommend? Let us know in the comments below.