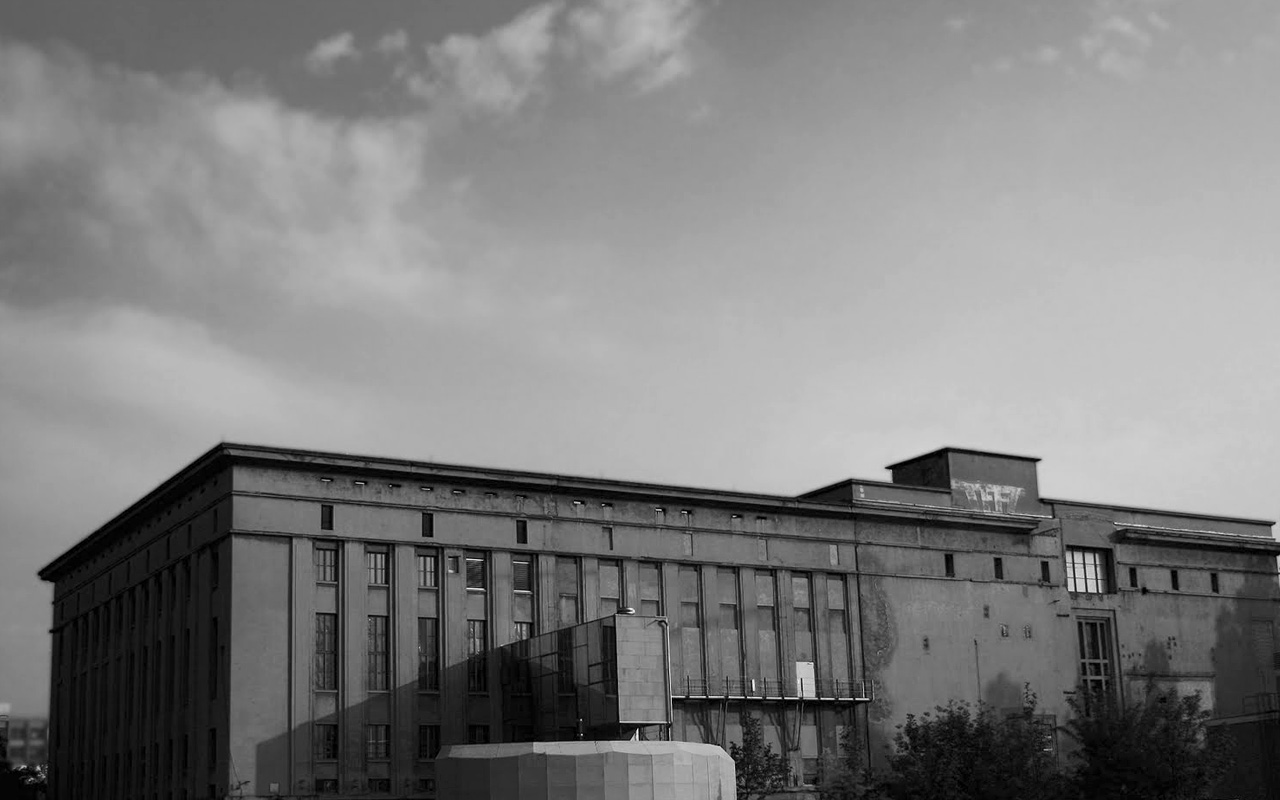 I didn’t have to think long which club I would start this series of clubbing experiences with.

Before I begin, let me give you a little bit of an insight into…well me. I promise I’ll keep it short. Pune girl, lived in Chennai during my formative years and now based out of Dubai. Balancing a flying job and Dj’ing with occasional writing stints. This article has been brewing for a long time.

It would be criminal not to start with my favourite club which is also regarded to be one of the best in the world for the various realms of techno. Berghain in Berlin. It’s everything one would imagine it to be and more. A lot more. The doors open on Friday and the marathon ends sometime Monday morning. Names like Ben Klock, Marcel Dettman and Cassy synonymous to Berghain and form an essential part of it’s history while the likes of Jeff Mills and Ricardo Villalobos have made guest appearances here. And yes, an Indian can get in though a few quizzical looks were exchanged during my first visit when I showed my passport for identification. Sven proved to be not too bad after all.

That one time the queue went down the front and the side in double files.

The looming building which once used to be a power plant is just as seen in the uncountable “I’m outside Berghain” posts of club goers and artist alike. The concrete columns on the façade of the building with the closed windows between them looking ever so enticing with the thought of wonderment of what’s going on inside. No matter how many times you go there, you can only guess by the muffled beats what the momentum on the inside might be.

Occasionally an open window of Panaroma Bar let’s out it’s secrets with ecstatic screaming and shouting.

The long snaking queues outside Berghain with hours of waiting are never deterred by rain, wind or snow. Though there are plenty of times when you can just walk in, Saturday early mornings seem to work well for me.

Once inside, a thorough security check of you and your belongings is conducted. After they are satisfied that you have no filming devices and place stickers on your phone cameras due to their strict no photography policy they let you in. The small checkpoint room opens into a large hall with a sizeable coat check to the right with primarily black clad figures stripping off some or all of their clothes. To the left people are sprawled along the wall and on the floor, taking a breather from the intense dance floors. Black leather clad, bondage harnessed and men with bare rears are part of colourful demographic of the club. Though may I add the punk/goth looking population and the harnesses are decreasing in numbers over my last few visits. But there is always at least one or two gentlemen adorning only a cock-ring at ease with themselves like they were standing in their own bedroom.

The whole attitude of Berghain is anything goes and nobody there gives a f***. No VIP area, no mirrors in the toilets, no bottle service, no table bookings combined with their phenomenal line-ups makes it one of the coolest clubs in the world. The crowd is a mix of gay, lesbian, straight and transvestites, with a sprinkle of Asian, black and brown faces. Truly for everybody which I love so much about this place.

At the very end of this hall is the maze of first set of privies which play a vital role in the clubbing experience of Berghain-goers. Sometimes used for their actual purpose it’s uncommon to see just one person leave the stall. What happens in there I’ll leave to your imagination. Pass these and it leads to the outdoor biergarten which mimics a university campus with everyone hanging out enjoying the summer sun in between stints of frenzied dancing within the concrete walls.

Back in through a doorway opposite the coat check is the first of the bar counters to the left of ground floor adjacent to which are glass and metal doors with red lights glowing from behind it. This is Säule, the newest addition to the 3 dance floors of Berghain. A smaller room with double pillared columns in the middle of the dance floor with lots of intimate corners for people to just chill. I haven’t experienced this room much any time except for wandering there looking for lost friends (or being lost myself). This space isn’t as buzzing as the other two floors upstairs thanks its ample seating space and focus on the avant-garde side of electronic music. Though it has the potential of being kind of a concert hall due to the size of the DJ booth sans the console. It is also probably the most traditional club-like part of Berghain.

Retracing back into the hall, by the iron stairway is a statue of a naked man with a low ledge right around it used on many occasions by myself to lie down, rest and recoup when the crowded dance floors get overwhelming.

Climbing up the stairs to get to the main dance floor of Berghain that feeling of trepidation kicks in if it hasn’t already yet. From the back of the room you can see an army of sweaty bodies swaying hypnotically to an incredibly well tweaked funktion one sound system. The light beams cast from the 60 foot high ceiling moving along to the beats and the spot lights lining the back wall subdued by the smoke machines add drama to the pulsating room made of concrete and metal. This is Berghain.

The main room as seen from the back wall when it’s empty.

The driving techno soundscape is occasionally refreshed by the likes of Anthony Parasole, Rødhåd and Shlomo experimenting with sounds and pushing the clubbers to experience something different. Sets of two bins are placed each side of the dance floor forming the dance podium for anyone who would like to indulge. And while I’m talking about indulgence let me tell you about the many dark rooms in the club, made for sexual activities of all kinds. Not that these don’t spill over onto the dance floors. One can go venture into the rooms if you dare or if one needs to, just be ready to feel bits of random strangers’ nakedness.

Snaking your way through the crowd you can move forward towards the DJ booth which is nothing fancy with a LED decibel meter mounted on the front of it which seldom falls within recommended limits. Set of earplugs is recommended if you’re a real trooper and plan to stay the whole weekend there. A copy of the schedule is posted on the wall to the right of the console listing mainly a minimum of 3-hour slots per DJ

Funny enough the bar staff at Berghain are sometimes tougher than the doormen with pleasantries reserved for bartenders mates and friends who come along to buy drinks. I lucked out the last time at the bar to the right of the main floor. While I stood waiting for my water massaging my cramping leg, one of the bartenders gave me magnesium tablets to help with the dehydration caused by the rampage on the dance floor. This bar is also a great place to bump into the likes of DVS1, Scarlett Etienne, Amotik and many more who visit to listen to fellow DJ mates and hangout with them.

Adjacently right to the bar is a small space with a big square swing hanging in it often sprawled with too many people to bear their weight on it. Common sight in seating spaces of many clubs where chemical fuelled bodies are awake but unable to be mobile. On the left is a stairwell leading up to my favourite part of Berghain….an ice cream shop and café at the top overlooking the dance floor. There is another staircase to one side of the ice cream parlour which leads to a locked metal rod door secrets of which are unknown to the many regulars I have asked. The one euro ice creams provide enough distraction to forget that door and are perfect for cooling off from the crazy heat of the dance floors and is way cheaper than water bottles. Though filling empty bottles from the taps at the basins is common practice. The heat generated by a sweaty mass of a thousand bodies stomping away makes for a giant sauna. It’s no wonder why so many people wear little clothing there. A few table fans kept on top of a structure at the back corners of the main dance floor provide little relief if you find the sweet spot where the air flows. But the ice cream break sure wins.

Times when some rest is needed

Though techno predominantly reigns on the Berghain floor, house and more melodic techno thrives in the floor above. Up a metal stairwell on the left of the main dance floor, through a small hallway which opens into the room is Panorama Bar. With windows facing the east side of Berlin, the USP of this space is when they open up the shutters of the windows all at once and the sunlight streams in….that moment the whole room erupts and it’s a feeling words can never do justice. It’s also a good place to chill as it has some seating all along the walls and the bar as well while you can bob your head to the bouncy beats. The speciality of the bar is a cocktail called Hemingway which was recommended to me by a local and has become somewhat of a ritual every time I visit Berghain. This level also has a maze of dark rooms and unisex toilets. The smell of sweat, urine and other bodily fluids that hangs in the air of these spaces somehow don’t feel some irksome and add to the atmosphere of the club.

The club has a sub level called the Lab.Oratory catering mainly to the gay community with themed nights hosted exclusively for indulging in hedonistic activities which you and I possibly can’t even begin to imagine. A little research on the event promos may shed some light on it. It is said that all urinals within the club open into shower heads fitted in the ceiling of an area within this space. And that’s only the beginning of it. Those bondage harnesses are starting to make sense.

To say the place has a phenomenal vibe would be an understatement. Guess the epic ness of the doormen does really filter the crowd. Rarely will you see anyone there looking out of place, as much as you may see things happening that you may not be used to. It’s all part of the environment and you just lap it up among everything else that you experience. Berghain has always been special and it will continue to be.

Content of the blog is strictly an intellectual property of Beatworx Music Private Limited. Replication in part or full is prohibited.
Loading Comments...